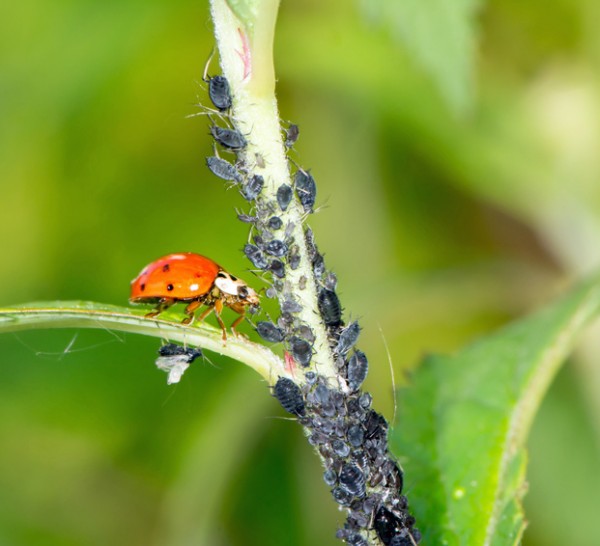 Description Manufacturer Evaluations 2
Description
There are many beneficial insects that help keep your plants pest-free. You can get them in... more
Close menu

There are many beneficial insects that help keep your plants pest-free. You can get them in specialiced shops or the Internet and apply on your infested plants. There, they do their gardener-friendly work and you get along without any chemistry.

Ladybugs and their larvae Ladybugs are real lucky charms in the garden, as they and their larvae eagerly eat aphids. In particular, the larvae can kill up to 150 aphids a day. Ladybug larvae can also be easily ordered on the Internet and exposed to the infested plants. Then you also do something good for the survival of the ladybug species, as it is increasingly displaced by immigrant Asian species in some regions.
Do not use insecticides, as they kill not only pests but also beneficial insects. For a natural spread in the garden, offer the ladybugs natural shelter and hibernation quarters in hedgerows and let shrubs stand until March. Lacewings are the insects with the greatest appetite for aphids after the ladybugs. The mature specimens have a light green body, filigree mesh wings and large, iridescent eyes, which is why they are also called "gold eyes". Their larvae feed until pupation exclusively of aphids (up to several hundred), which they grab and suck with their mouthparts. For this reason, and because the sucked aphids often get stuck to their bristled bodies and form a kind of mane, they are also called "aphid lion".
You can attract lacewings into your garden by planting catnip in your perennial beds. This contains an odorant that resembles and attracts the lacewing pheromones. For over-wintering the lacewings like straw-filled boxes near a wall or an insect hotel. If you need help quickly for your plants, you can also buy lacewing larvae on the Internet or at retailers and spread directly on the infested plants. Also, hoverfly larvae are an important natural helper in the fight against aphids. One larva can eat up to 700 aphids in two weeks. The adult animals camouflage themselves wasp-like, so as to hold off predators. However, you can see them well, if you look closely: their typical flight behavior is to stay sometimes almost motionless in the air, and they do not have the typical "wasp waist" and also only 2 wings and no sting. Since the adult animals feed on nectar and pollen from composite and umbelliferous plants as well as many yellow flowers, you can attract them easily in the garden (e.g. with goldenrod, daisies, dandelion, wild carrot, evening primrose, roses, wine). The females lay their eggs in aphid colonies in spring. Therefore it is very important not to spray chemicals during this time. Offer hibernation quarters in cracks, hollow stems or fall foliage. The hover fly Encarsia formosa is also commercially available and is often used against white fly plagues in greenhouses. Especially in the orchard, earwigs are popular beneficial insect against aphids, but they also help on the balcony or terrace. These insects are nocturnal and hide during the day in crevices and under leaves or flower pots. In the twilight, they leave their quarters and look for aphids, larvae, blood and scale lice and caterpillars, but graze also from mildew lawns. In dry years, they also consume plant parts to meet their water needs. You can attract earwigs with a wooden pot filled with wood wool. You can also "move" them to another location if they become too numerous and if they eat too much of your plants. For overwintering in sleeping communities, they prefer sticks and piles of foliage - so it`s worth to wait cleaning up the garden until March. Few people know this extremely effective slug hunter, but often confuse it with slugs. In physique, it actually looks like a big slug, but it is clearly distinguished by its beautiful, tiger stripe or leopard-like pattern. Unlike the slugs, it is extremely useful. It feeds on slugs, their clutches, carrion, dead plant parts as well as algigen and mushy growths on tree barks. It is nocturnal and rests during the day in damp cavities, cracks, under boards, deadwood and stones. Their range of action is about 5 to 10 meters around their night quarter, so you can strategically place their shelter. If they feel comfortable in your yard, they will produce plenty of offspring and the slug nuisance in your backyard is history. However, you should definitely refrain from slug pellets, as this kills leopard slugs as well. Among the most important beneficial insects are the ground beetles, e.g. the Bronze Carabid (picture). In the garden they are useful helpers against pests, like worms, larvae and slugs. Soldier beetles, which are relatively soft-bodieda and straight-sided, eat in addition to nectar and pollen also aphids, snails, caterpillars and other insects.
European Carrion Beetles feeds on live snails, insects and earthworms and are able to penetrate into hard shell houses and consume the snails. He prefers moist spots in the moss or in the tree bark. There are many other insects in the garden. So weigh very carefully whether a chemical pest control is really necessary, because they also kill your hard-working helpers. It makes more sense to support the beneficials, so that in the long term a biological balance can be established and the pests are kept in check by the beneficial insects. There are over 10,000 species of parasitic wasps in Mid Europe. Their name origins from the fact that they lay their eggs in the eggs or the bodys of a host insect, which is eaten by the developing larva. The females can parasitize up to 1000 aphids in their often only 2-week life span. The various types of parasitic wasps specialize in various host animals, including aphids, caterpillars, food moths, as well as fly and beetle larvae. They have also proven to be useful against white flies in greenhouses. The different types are available from specialist retailers or the Internet. An example is the parasitic wasp Aphelinus abdominalis, which feeds i.a. the foxglove aphid (Aulacorthum solani), the potato aphid (Macrosiphum euphorbiae), the yellow rose aphid (Rhodobium porosum), the rose aphid (Macrosiphum rosae) and the very common green peach aphid (Myzus persicae).

Sprouts - superfood from the windowsill
Customers also bought
Cookie preferences
This website uses cookies, which are necessary for the technical operation of the website and are always set. Other cookies, which increase the comfort when using this website, are used for direct advertising or to facilitate interaction with other websites and social networks, are only set with your consent.
Themes