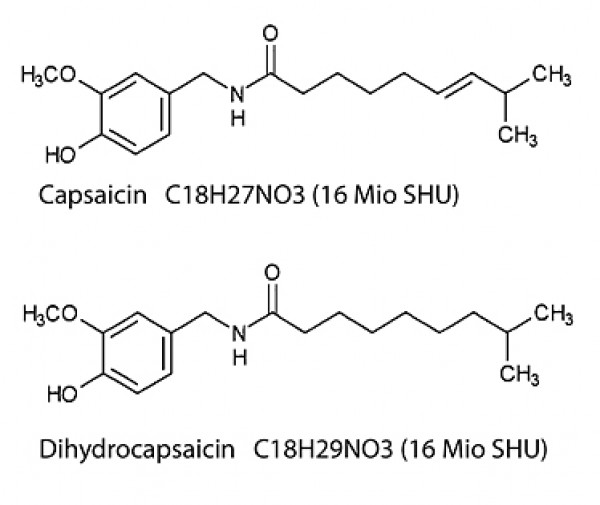 Description Manufacturer Evaluations 3
Description
Why do chilies taste spicy? The spiciness of chilies probably originated through a... more
Close menu

Why do chilies taste spicy? The spiciness of chilies probably originated through a symbiotic relationship of the plants with birds. Birds are the main distributors of the seeds, as they eat the chilies and excrete the undigested seeds. Birds have no receptors which can sense the spiciness of either the fruit or the seeds. This is a total contrast to mammals, especially rodents and climbers, who like to feast on fruits. With the chemical Capsaicin (which makes the chilies spicy), the plants protect themselves against being eaten by mammals. As when mammals eat the fruits, the seeds change during digestion so that they can no longer germinate. On the other hand, after birds excrete the seeds, the majority can still germinate1. After excretion, the seeds are affected by considerably less fungi and germs, and are virtually odour-free, which in turn protects them against predators. Parallel to this, the seed coats are mechanically "softened" in the gizzard and by the hydrochloric acid in the glandular stomachs of the birds, which allows easier germination. Fundamentally, this is a kind of pickling. Other studies show that the plant protects itself through its Capsaicin content against mould infestation, which is a frequent hazard for plants, particularly in the tropics2. The group of spice makers (Capsaicinoids) includes Capsaicin, Dihydrocapsaicin, Homodihydrocapsaicin und Nordihydrocapsaicin. Chemically speaking, these belong to the alkaloids, and are exclusively produced by the genus Capsicum (peppers and chilies).

Capsaicin is produced in the glands of the upper layer of the placenta of the Chili; these are the light parts on which the seeds hang. Contrary to popular belief, the seeds and the fruit-flesh do not produce any Capsaicin. If they still taste spicy, this is because the active substance from the placenta has diffused into them.

The spiciness of various Chili species and products is determined by the Capsaicin content, and is given in Scoville Units (Scoville Heat Units – SHU).

Why does Chili “burn” our mouths?

Strictly speaking, we cannot “taste” spiciness (we can only taste sweet, bitter, salty, sour and umami*), instead, we perceive spiciness via neurons which are responsible for sensing heat. If the temperature in the mouth goes above 43°C, e.g. if we eat soup which is too hot, then the nerve receptors trigger a sensation of pain in the brain. In addition, cells are destroyed in the mouth through this real burning, and we often have a numb sensation in the mouth for several days. Capsaicin, on the other hand, has a deceptive effect on these heat receptors: it decreases the pain threshold of the perceived temperature to below 37°C, so that the nerve constantly sends the pain signal to the brain. This has the result that chili on your tongue hurts like hell, just like a soup that is too hot. It “burns”! However, since the body is only tricked by a false sensory perception (“too hot”), the feeling of pain passes with out any serious repercussions. In this respect, the English language is a little more accurate than the German: in English “spicy” and “hot” can mean the same thing. Another advantage of eating a spicy chili is that the brain immediately releases endorphins (happy hormones) to help you endure the pain. Thus, eating spicy food makes you happy: This is also called the “Pepper High” effect.

But Caution: Capsaicin doesn’t only burn your mouth, it can also produce a burning feeling on the skin, in the mucous membranes, in the eyes, etc. You should therefore always wear gloves when handling spicy chilies, never touch your eyes, always wash your hands, knifes and cutlery thoroughly, and ensure that children are not in the vicinity. Even when cooking or grinding chilies, spicy steam/dust can develop which can irritate the eyes and lungs.

What should I do if it burns?

If you take a sip of cold water after eating chilies and hold it in your mouth, the pain quickly disappears, but then strikes again with full force. Why?

The body responds to the removal of the perceived burning with a short period of pain relief. However, as the alkaloid Capsaicin is not water-soluble, the cause of the pain remains in the mouth and causes further pain. Fatty foods are much better: the best remedy is cold whole milk, but yogurt, milky ice cream, mayonnaise or cheese (this is perhaps the reason why so many Mexican chili dishes are topped with melted cheese) also work.

Capsaicin also dissolves more easily in alcohol than in water, therefore beer, vodka or wine are much better than water. Alternatively, you can mechanically remove the spiciness in your mouth by chewing bread, as this scrapes the Capsaicin away, so to speak. Heat and spiciness receptors are all pain nerves, and these can also be found in the stomach. So you may also feel a burning feeling in your stomach, especially if you eat very spicy food on a sensitive stomach. In this case, a glass of milk helps very quickly.

Most people perceive fresh chilies as being particularly spicy. This is because chewing the chilies works the Capsaicin into the oral mucosa. If you swallow a whole chili down in one, you won’t feel anything in your mouth. But when you chew or cook the chili, it becomes very spicy. Everyone perceives and tolerates spiciness differently - some people with very sensitive stomachs cannot tolerate any chilies at all, while others only notice a slight spiciness after many thousand Scoville Units.

We can get used to Capsaicin

The receptors get used to Capsaicin and with time the body doesn’t react so strongly to it. Therefore, with some training, you can eat spicier and spicier food, and thus people from cultures in which chilies belong to the everyday menu can tolerate extremely spicy dishes. One form of training not recommended for imitation is that of Theodoros Kiapidis from Lindau, the World Champion in Chili eating, who in a competition once ate 438 grams of a chili mix in only 12 minutes. To train for this, he rubbed his tongue with 20 drops of chili sauce every morning. However, even he couldn’t tolerate this impressive amount of chilies well, and during the night after he suffered from stomach cramps and diarrhoea (http://www.spiegel.de/spiegel/print/d-128743717.html).

*umami: Umami is the Japanese word for “savoury" and was first described as a distinct taste quality in 1908 by the Japanese Ikeda Kikunae. This full-bodied taste is caused by glutamic acid, a natural glutamate (flavour enhancer) which is primarily found in protein-rich foods (meat, cheese - in particular parmesan, mussels), but also in mushrooms, ripe tomatoes, celery, soy sauce etc.