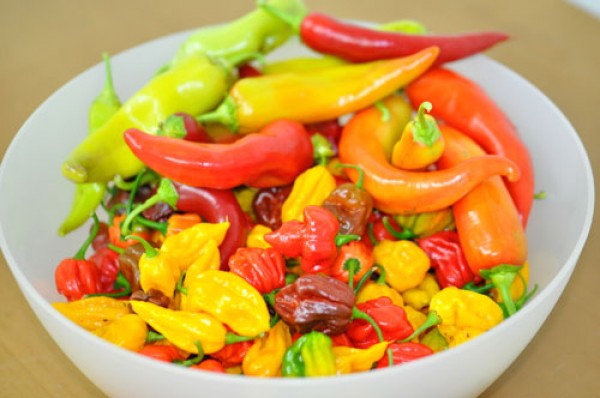 Description Manufacturer Evaluations 1
Description
Chillies and their spiciness The spiciness of chillies has its origin in Capsaicin , which... more
Close menu

Chillies and their spiciness

The spiciness of chillies has its origin in Capsaicin, which is more or less present in all types of chili. A few decades ago, Hungarian scientists succeeded in cultivating a chili with almost zero Capsaicin present in it: Our beloved sweet peppers. Each type of pepper, cayenne or chili has its origins in the original wild chili. This is comparable with the various breeds of dogs that are descended from the wolf.

But why do chillies burn our mouths? Why do we begin to sweat? And why do we feel good about it, as if we’re almost in a state of euphoria?

Capsaicin and our nervous system

Capsaicin is the generic term for 5 alkaloids. The confusing thing about these 5 spicy subgroups is that one of these alkaloids in turn is called Capsaicin, and is the spiciest of them all. Each of the alkaloids has a different effect. Some burn your mouth immediately, some later, and more long-lasting. As described, different alkaloids are responsible for this.

How does Capsaicin react in our mouth? Don’t worry, intensive enjoyment of chillies cannot destroy your taste buds. Instead, you can achieve that through smoking and drinking alcohol. Capsaicin is detected by our nerves, and not our taste buds. The body sends interesting information on to our brain: Our mouth is burning! The brain quickly releases Endorphins (happy hormones) to help us endure the pain. These are the same hormones released when participating in extreme sports.

If you then take a sip of cold water after eating chillies and hold it in your mouth, the pain quickly disappears, but then strikes again with full force. Why? The burning feeling is positively influenced by water, and the body reacts to the short-term pain relief. As the alkaloid Capsaicin is not water-soluble, the cause of the pain remains in the mouth and causes further pain. The only means to relieve it are foods containing fat and alcohol such as milk, cheese, oil or simply alcohol in all forms.

The body gets used to the Capsaicin, and with time doesn’t react so strongly to it, so one can eat spicier and spicier foods. In one experiment, rats were treated with Capsaicin from birth, and eventually could receive drops of pure Capsaicin extract in their eyes without having even the slightest reaction.

So the normal consumption of chillies is anything but dangerous. The body is only confused, and is definitely not injured. But don’t forget - this is with normal consumption. For example: Chocolate isn’t dangerous, but if you eat 2kg per day then you’ll be for the high jump. A Habanero eating contest is therefore not entirely harmless.

How do we measure spiciness?: The Scoville Scale

Scoville Units are the official scale for chillies. In 1912, Wilbur Scoville had the idea of measuring the spiciness of chillies. He dissolved different amounts of chili powder in sugar water, and gave it to test subjects to try. Then the solution was diluted with sugar water to the extent that there was no trace left of spiciness.

Pure Capsaicin is so strong that Wilbur Scoville had to omit a few zeros. One part Capsaicin in a million parts of sugar water gives the measured value of 16 Scoville units. The Scale is divided into sections 1-10 (0 – 16 Million Scoville Units) .

This scale has existed for almost 100 years, however the measuring methods have changed significantly. The High-Performance Liquid Chromatography (HPLC) measures the exact Capsaicin content.

Milk, oil and alcohol help with “burning” in the mouth area. The latter should not be used as a cheap excuse. Bread also helps, because chewing removes part of the Capsaicin.

For “burns” to other parts of the body, extreme caution is required. We cannot and should not give advice in this case. Contact a doctor immediately.

Nevertheless, for burning in the eyes it helps to thoroughly rinse them with water, as with all foreign bodies in the eye. You could also use a milk-soaked bandage for your eyes. This option must be discussed with a doctor beforehand.

The best prevention is, and remains, to avoid such an occurrence. Chili products are not toys. Never leave them in the reach of children. Never surprise chili novices with extremely spicy products. This can easily backfire and end seriously. When working with chillies it is best to use rubber gloves. If you get any chili on your hands, immediately wash them with cooking oil. Soap does not help.

Is an overdose of Capsaicin dangerous?

An overdose of chillies? Yes and No! One would have to consume several litres of most chili sauces. However, if your body is attacked by a virus or infection and is in poor physical condition, the consumption of Capsaicin can - just like riding a rollercoaster - result in serious injury. You cannot suffer gastric perforation through the consumption of chillies. However, a stomach which is very close to perforating can perforate through overdosing. Just like with alcohol or similar.

Chili sauces which are strongly similar to pure Capsaicin, as they are made from concentrated extract, are definitely dangerous if used incorrectly. They are only suitable for adding to foods. If this is not respected, it could result in serious and permanent injuries. Enjoy the fire. Dont play with it.