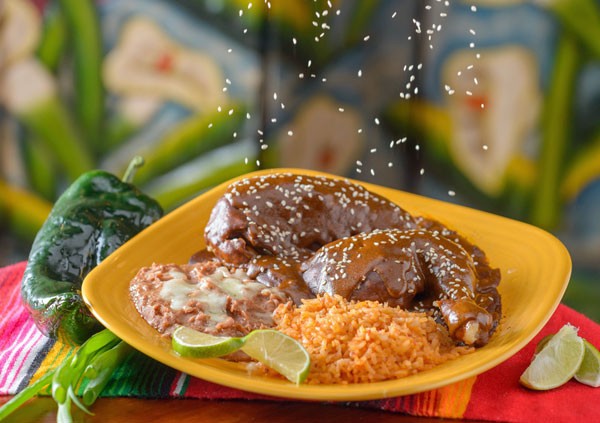 Recipe for a classic Mexican dish - chicken with Mole sauce

Mole is the traditional Mexican sauce served with chicken or enchiladas, but there are a variety of recipes according to family tradition and state. Some recipes use up to 35 different ingredients, but all recipes have in common the use of bitter chocolate and the particularly tasty Mexican chillis, mulato, ancho and chipotles. The preparation is a little complex, but absolutely worth it!

Cook the meat in the chicken broth for 10 minutes, remove and dry with paper towel. Set broth aside!
Quarter the onion and place it together with garlic and tomatoes in a roasting tray and cook for about 15 minutes in the oven at the highest level. Soak the chillies in hot water for 15 minutes. Peel the plantain and cut into slices.
In a pan, heat 1 tblsp of butterfat over medium heat and toast the peanuts and almonds until they are golden brown and set aside. Then sauté the baking plums, cooking banana and the raisins and add to the nuts. Finally, toast the sesame seed to golden brown and remove. Remove a little sesame seed and set aside for the garnish.
Then toast the cloves, star anise, allspice briefly in the pan, until they smell. Combine with Oregano, cinnamon and sesame seeds in a mortar to make a paste and then add to the nut mixture.  Drain the chillies and finely purify them with a little chicken broth in the blender. Then add the nut mixture, spices and another 250 ml chicken broth and mix in the blender to a thick paste. Pour more broth when necessary.
Heat 50 g of butterfat in a pot, add the puree and simmer for about 5 minutes while stirring under medium heat. Then pour in 500 ml of the broth and 250 ml of water, season with plenty of pepper, salt and sugar and simmer on low heat for about 20 minutes. If necessary, add more chicken broth. Chop the chocolate and add to the sauce and simmer for additional 10 minutes.
In the meantime, fry the meat, serve with the sauce and rice, and garnish with roasted sesame seed. 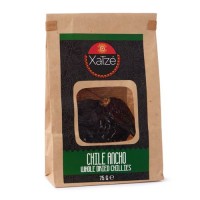 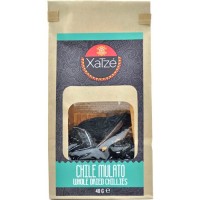 Whole dried red Mulato Chillies
The whole dried Mulato chillies have have been harvested overripe and have a dark chocolate colour. They are flat and wrinkled  and measure 4 by 3 inches with a tapered bottom. In Mexico, they are very popular due to their...
Content 0.04 Kilogramm (€87.25 * / 1 Kilogramm)
€3.49 *
2 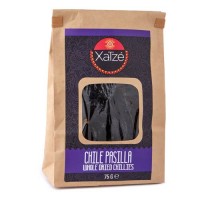 Whole dried Pasilla Chillies
The Pasilla chili originates from Mexico and in Spanish its name means “little raisin”, an allusion to the deep brown dried pods and raisin like aroma of this flavourful chili. The dried chocolate brown pods have a rich...
Content 0.075 Kilogramm (€53.20 * / 1 Kilogramm)
€3.99 *
5 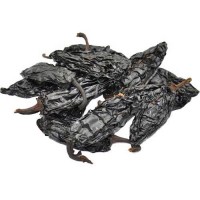 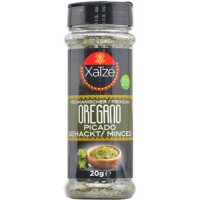 Mexican Oregano
Our Oregano comes from Mexico and has received a lot of sunshine. Thus, it is much more flavourful than the one grown in Europe. Oregano is generaly known as Pizza spice, but it can be used even more versatile. It is indispensable for...
Content 0.02 Kilogramm (€149.50 * / 1 Kilogramm)
€2.99 * 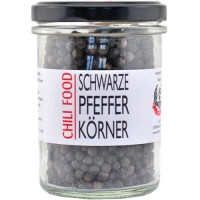 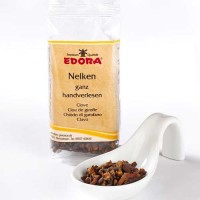 Whole Cloves
The intense aroma of cloves make them well-suited for flavouring marinades, meat, fish, fruit, desserts and gingerbread among other things. For example, whole cloves are used as a spice in mulled wine. Ground cloves are also found in...
Content 0.05 Kilogramm (€65.80 * / 1 Kilogramm)
€3.29 * 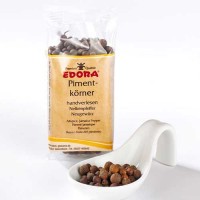 Whole Allspice
Allspice is primarily used in Caribbean cuisine. Here in Germany, whole allspice berries are used for making marinades or pickling foods. In its ground form, allspice is used as a seasoning for soups, sauces, game and fish dishes....
Content 0.05 Kilogramm (€55.80 * / 1 Kilogramm)
€2.79 * 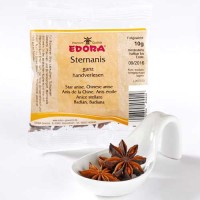 Whole Star Anise
Star anise is a very aromatic spice that is often used in Christmas baking for example or in mulled wine. In addition, star anise also tastes fantastic with game meat, desserts and Arabic or Asian cuisine such as rice and fish dishes.
Content 0.01 Kilogramm (€199.00 * / 1 Kilogramm)
€1.99 * 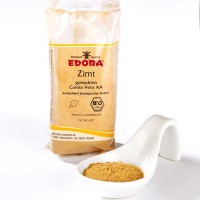 Organic Ground Cinnamon
Indonesian cinnamon (cinnamomum burmannii), or Burma or Java cinnamon has a stronger flavour and is harder and darker than Ceylon cinnamon. Indonesian cinnamon contains coumarin, to which it owes its fine aroma. Here in this part of the...
Content 0.07 Kilogramm (€42.71 * / 1 Kilogramm)
€2.99 *
Themes