Info: Basil is one of the most popular kitchen herbs, especially in Mediterranean cuisine. Particularly with tomatoes it unfolds its incomparable flavour. However, it is also an ancient medicinal plant, it acts appetizing, promotes fat digestion, soothes the nerves and can relieve migraine.
The Cinnamon variety is very true to its name, because it has a distinct cinnamon aftertaste, although initially it very much resembles sweet basil, but with a cooler flavour.
The plants have attractive dark purple red stems annd pink flowers that enhance the ornamental appeal. It is a tall plant, growing to be 75cm (30in) tall in good soil.

Sowing & Cultivation: Sow in March to April for growing under glass or from end of May on outdoors. Sow 2mm deep, 5-10 seeds per 12 cm containers. Outdoors sow 50 seeds per meter with a row distance of 25 cm. Basil needs a sunny, sheltered location and a nutrient-rich soil. Water regularly, but avoid waterlogging. When the plant begin to flower, they do not form new leaves, so you should remove the florescence. In the Mediterranean countries, basil grows for several years, but overwintering on the window sill is difficult because the plants usually get too little light and are susceptible to pests and diseases. 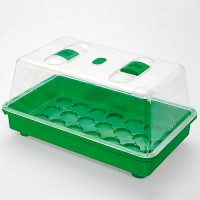 Indoor Greenhouse
Our Romberg indoor greenhouse has been made using very robust plastic with “Made in Germany” quality, something you can’t fail to notice. The ventilation holes on the side are particularly practical as well as the two...
Content 1 Stück
€9.99 * 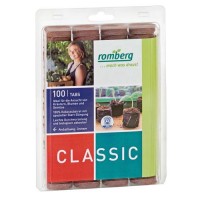 100 Coir Pellets
The practical little helpers for plant breeding. Simple and clean. Just add water and you will immediately get a small powerful soil ball. Due to its special nutrient mix it provides your chili seedling with everything it needs for...
Content 100 Stück (€0.12 * / 1 Stück)
€11.99 *
Themes