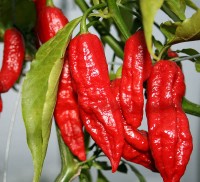 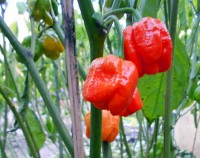 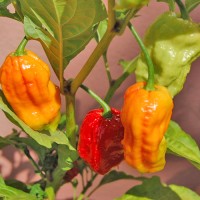 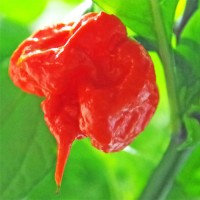 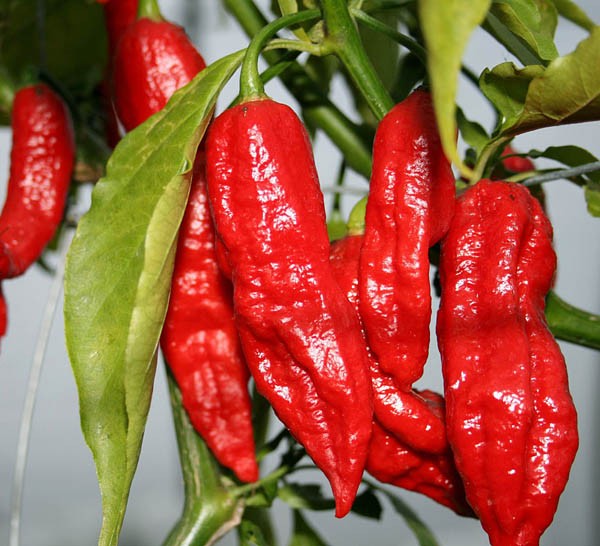 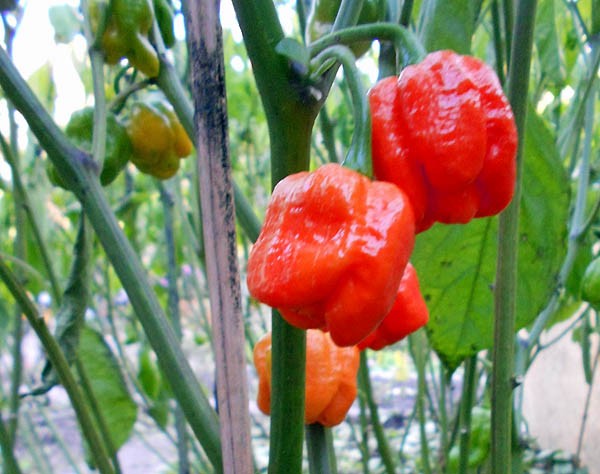 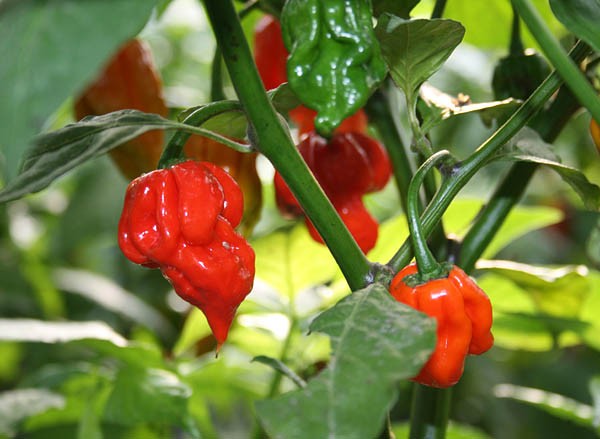 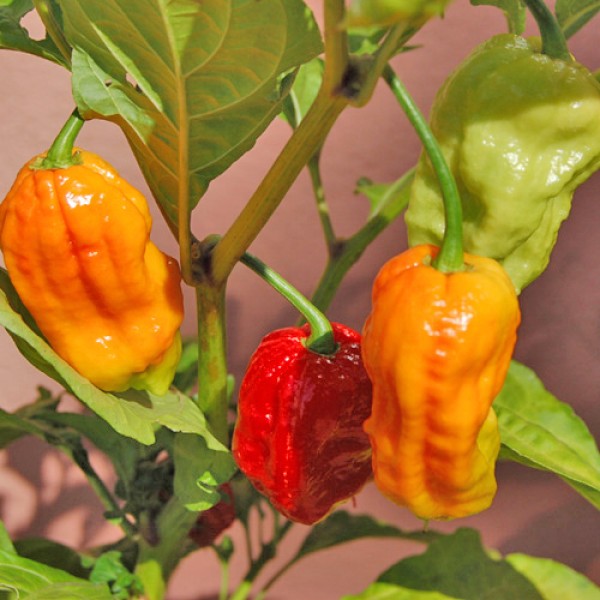 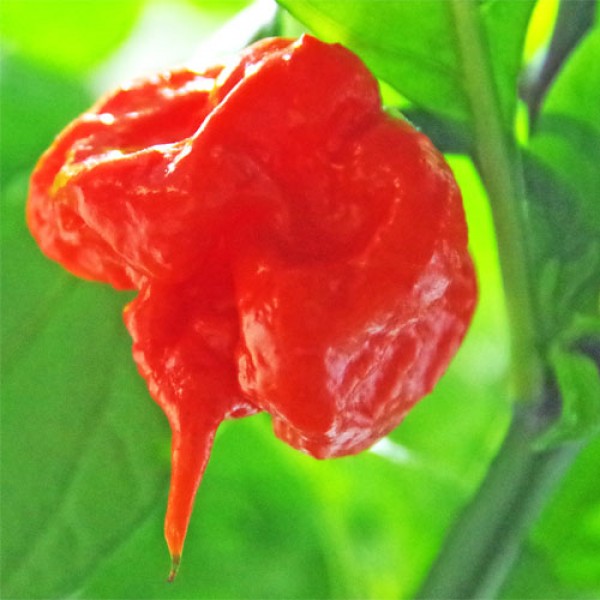 Description Manufacturer Evaluations 0
Description
Get to know the spiciest chili varieties in the world, and find out interesting background... more
Close menu

The spiciest chili varieties in the world

Get to know the spiciest chili varieties in the world, and find out interesting background information on the record holders 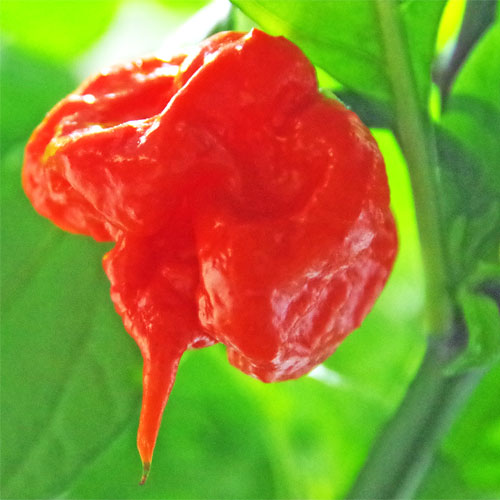 Since November 2013, a Capsicum chinense variety has held the world record for the world’s spiciest chili: the Carolina Reaper was bred by the Chili breeder Ed Currie from the PuckerButt Pepper Company in South Carolina (USA) (Guinness Book of World Records: http://www.guinnessworldrecords.de/records-1/hottest-chili). Its name references the “Grim Reaper”, which hints at the chili’s probably almost fatal level of spiciness. The tested average spiciness lay at 1.569.300 Scoville Units, while individual specimens brought it up to an incredible 2.2. million SHU.

The fruits ripen from green to orange to red, and like the Trinidad Scorpion, have a pronounced pointed spike. The uneven surface is similar to that of the Bhut Jolokia.  The chillies are, of course, extremely spicy, but are also very flavourful. They are not suitable for eating in their pure form, but are excellent for chili sauces, drying, pickling or freezing.

You can buy the Carolina Reaper in our Shop as seeds, early Chili plants (approx. 20 cm large) and as chili powder. 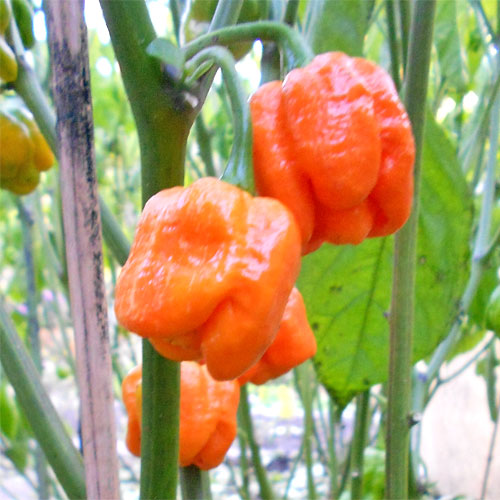 Before the Carolina Reaper took its crown, the Trinidad Moruga Scorpion held the record for the world’s spiciest chili for one year (2012). It is a hybrid from the Capsicum chinense species and was bred in Trinidad and Tobago, an island nation off the coast of Venezuela. The measurements by the Chile Pepper Institute of New Mexico State University gave average values of 1.207.764 Scoville Units with top values of up to 2.009.231 SHU, the first time that a chili plant had reached values over the 2 million mark. The Trinidad Moruga Scorpion replaced the defending champion Trinidad Scorpion Butch Taylor, which had higher values, but its measurements were not carried out according to generally accepted and verifiable scientific standards.  The scientific evidence and spiciness measurements of the Trinidad Moruga Scorpion were better carried out by the Chile Pepper Institute and were clearly documented: http://www.chilepepperinstitute.org/content/files/trinidad_moruga_scorpion_pepper_hottest.pdf.

The peppers of the Trinidad Moruga Scorpion ripen from green to orange to red and have a spicy but also fruity flavour. In contrast to the Trinidad Scorpion Butch T, they do not have pointed spikes, but do have an uneven surface.

You can buy the Trinidad Moruga Scorpion in our Shop as seeds, early chili plants,chili powder or Trinidad Scorpion Moruga Hot Sauce. 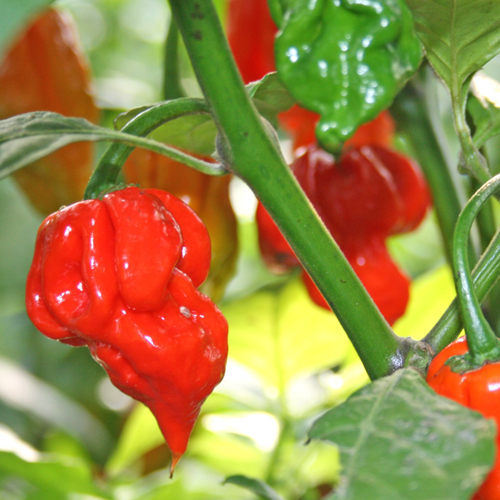 The Trinidad Scorpion Butch Taylor Chili is also a variety from the Capsicum chinense species. This chili originates from an Australian farm (Chilli Factory), was measured by an Australian company (EML Consulting Services Morisset, New South Wales) and was found to have an average of 1,463,700 SHU. While this was a higher value than that of the Trinidad Moruga Scorpion, which was the record holder in the following year, it was topped by the better scientific evidence and the peak values of the Trinidad Moruga Scorpion.
As their secret for the spiciness, the breeders claimed that they used waste water from a neighbouring worm farm to water the plants, as it was particularly rich in chitin and nutrients.

The Trinidad Scorpion Butch T chillies can be recognised due to their pointed spikes. They have a very flavourful and fruity taste, and are naturally extremely spicy.

You can buy the Trinidad Scorpion Butch T in our Shop as seeds, chili powder, whole dried chillies and seasoned peanuts (Warning, they are extremely spicy!).

The Bhut Jolokia variety was the spiciest chili in the world for a relatively long time until it was outstripped by newer, spicier varieties. This plant is also a variety of the Capsicum chinense species. Investigations by the Chile Pepper Institute in 2005 gave it a value of 1.001.304 SHU, making the Bhut Jolokia the first chili variety to exceed the magic One Million mark.

There are many different names for Bhut Jolokia circulating on the Internet and in literature, such as Bih Jolokia, Naga Jolokia, Naga Morich, Raja Mircha etc., these all refer to the same variety. This chili originates from North East India (Assam) and has various, regional names. It was cultivated and used in North East India for many years before it became well-known.

The long Bhut Jolokia Purple chillies ripen from green to red to violet, have an uneven surface and a fruity flavour. They need a lot of warmth during cultivation, and the chillies have a very long ripening time.

The levels of spiciness of all chili varieties depend on the varying growth conditions. The development of spiciness can be influenced by high temperatures, a lot of sunlight, and also water stress.
In our Shop you can find numerous products from and with Bhut Jolokia, in addition to seeds and early chili plants we also offer powder, sauces, peanuts and salami. 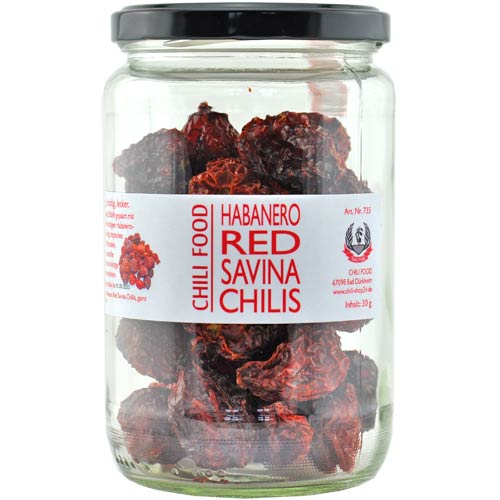 The Habanero Hybrid Red Savina was the world record holder for the spiciest chili for a very long time. The Red Savina is also a variety from the Capsicum chinense species. It was bred by a company in South California for Capsaicin extraction, and the breeder Frank Garcia named it after his mother-in-law. As it is protected as a trademark, this variety is difficult to obtain as seeds or plants outside of the USA. The measurements gave a spiciness level of 577.000 SHU, however, this amount was always lower in later measurements.

The fruits are lantern-shaped with a smooth surface, and are deep-red in their ripened state.

You can buy Red Savina in our Shop as powder, whole dried chillies, chili flakes and as sauce. 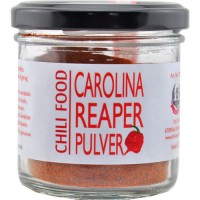 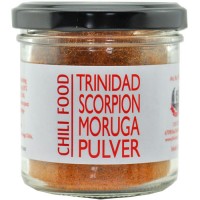 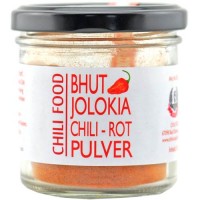 Bhut Jolokia Chili Powder
The Bhut Jolokia Red is one of the hottest chillies in the world - it was the first that had passed the 1-Million-Scoville-mark and held the world record from 2007 to 2011. It originates from the region of Assam in India and has been...
Content 0.05 Kilogramm (€129.80 * / 1 Kilogramm)
€6.49 *
Themes